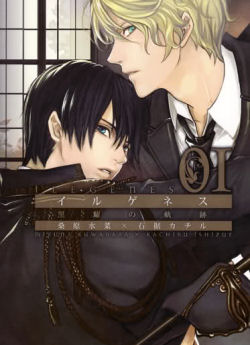 On the surface, the island nation of Ilegenes is the world-renowned capital of genetic engineering research, specializing in technology used for the creation of genetically modified crops. In reality, however, it is plagued by rampant amounts of illegal cloning, its many denizens capitalizing on the sales of illegal clones to the Black Market. For this reason, it has earned the nickname the Genetic Sodom.

Enter Fon Fortinbras Littenber, the incredibly talented but distant student representative to the incoming class at Ilegenes Military Academy. Revered by many for his uncanny intelligence, which led him to graduate high school two years early, and reviled by others for his position as the adopted son of the famous genetics researcher Dr. Littenber, Fon has entered the academy for reasons entirely distinct from those of his peers: His goal is the utter destruction of the Black Market, the organization responsible for the brutal murder of his parents when he was a child. He soon finds that school life comes with more distractions than he expected, however, including his new roommate, the free-spirited and fun-loving Jacques; the poisonous and resentful prime minister's son, Andrew Kristofferson; the criminal underground and its unsavory cloning industry; and the reemerging secrets of his own dark past.

Ilegenes - Kokuyou no Kiseki is a sci-fi shoujo manga that ran in Comic Avarus and Comic Blade Avarus from 2008 to 2010. It is written by Mizuna Kuwabara (Mirage of Blaze) and illustrated by Kachiru Ishizue, spanning five volumes. In 2010, a sequel entitled Ilegenes - Giyoku no Koukyoukyoku began serialization in Comic Avarus and is complete at three volumes.