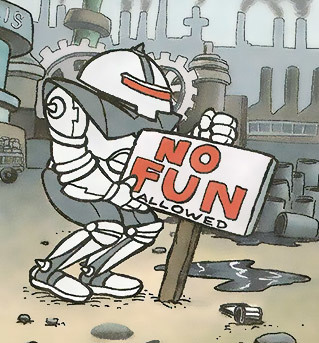 Who would've figured Robotnik would be a "Stop Having Fun" Guy?
"Anyone found not having a good time will be shot."
— Graffito, Fatherland
Advertisement:

A Mary Suetopia, Crapsack World or Planet of Hats oftentimes has a single, not very realistic law (with other laws existing to shore up that law) which, often contrary to common sense, defines that society. The penalty for breaking the Dystopian Edict is usually draconian in nature — death or imprisonment are the most common, but worse punishments exist, particularly in speculative fiction.

This edict must never have existed in any past or present society (nor, in many cases, could it), and probably couldn't be enforced in the real world for more than two minutes.

Dystopias with a variety of different laws and rules, no matter how draconian, don't count. (E.g. The Giver.)

Contrast Fascist, but Inefficient and Dystopia Is Hard. Dystopian Oz is a sub-trope based off of the Land of Oz series.

As mentioned above, this trope is by its nature not applicable to real life.