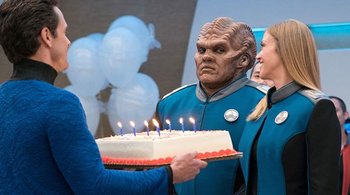 They'll soon wish it wasn't their birthdays...
The ship discovers a seemingly utopian planet that's never encountered alien life before. The First Contact mission ensues, but the crew suspect something dark lies under the service of this "utopia."