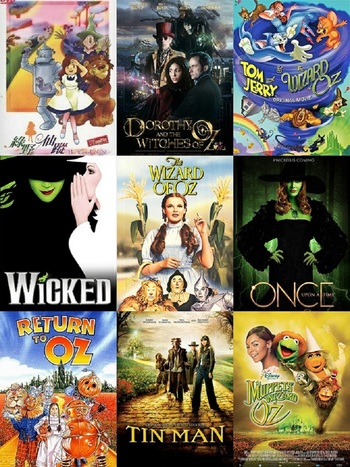 The Land of Oz is a fantasy setting created by L. Frank Baum in his novel The Wonderful Wizard of Oz. The book has had 39 official sequels (among many unauthorised ones and spinoffs) with the originals generally being called "The Famous Forty", 14 of them being written by Baum.

The Wonderful Wizard of Oz was adapted for the stage almost immediately, and was a massive success, inspiring Baum to begin writing the sequel novels. It has since been adapted numerous times, in nearly every conceivable medium, including a 1939 film musical that for many people is more familiar than the original novel; most film adaptations these days will at least allude to the 1939 film in some way, although copyright makes this tricky. The number of non-literary adaptations decrease rapidly the further into the sequels you look, with almost none after the third novel, although elements from later novels do frequently appear in adaptations of the earlier novels.

Out of the “Famous Forty”, 26 of the books are public domain, allowing considerable scope for unlicensed spin-offs, sequels and re-imaginings; thus making the trope Dystopian Oz possible, which many of the below works employ. Given the public domain status of most of the original books by now, fan fiction of the series can be legally published and profited from. Series that take on their own unique interpretations of Oz, such as The Wicked Years and Dorothy Must Die, have found great success with major publishers. Pseudocanonical Fic that tries to stick to the original canon of the Famous Forty Oz books are more niche, and many of these stories have been published by The Royal Publisher of Oz, the Hungry Tiger Press, Books of Wonder, the official fan magazine Oziana, and others over the years. The Royal Publisher of Oz

is nowadays the main publisher of these canon-friendly Oz stories (other than those who self-publish), and maintains an extended canon for modern stories that are close enough in tone to the original books.

Oz-related works with their own pages on this wiki include: