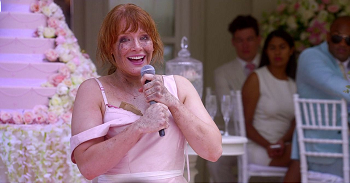 "You've just got to play the numbers game, it's how the fucking world works."
"No one is this happy. A two-year-old with a fucking balloon isn't this happy."
Advertisement:

In a smiley, status-obsessed dystopian future where people rate each other on a Facebook meets TripAdvisor hybrid social media platform, an insecure office worker sees an opportunity for social advancement when an old school-friend, one of the top-rated elite, gets back in touch and invites her to her upcoming wedding.

Prospero Hall published a Card Game based on the episode called Black Mirror: NOSEDIVE in 2018.