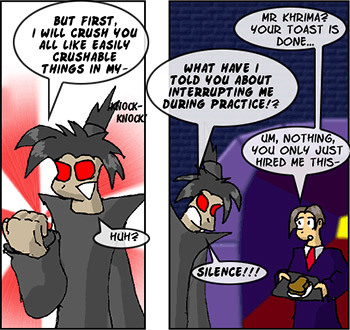 A subversion of the most fundamental aspect of Dialogue: whether a character is talking to someone else or not.

Commonly, a character will appear to be making a brave confession, and then be revealed to have just been practicing before a mirror. Or, he will seem to be explaining his life to someone, and then be shown to be talking to a gravestone.

Alternatively, a character will clearly be talking to himself, but we find out that someone just happened to overhear. (Bonus points if it was the intended recipient of a difficult request.) This can follow on the first kind for a Double Subversion of dialogue.

Visual media typically use a Reveal Shot, often a Close-Up on Head, to execute Trick Dialogue. Compare Fourth Wall Psych (where the character appears to be speaking to the audience but is actually talking to another person). See also Not So Dire.