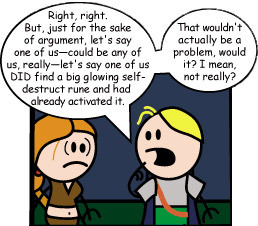 Anders: Yeah, and then you wake up one day and discover you're another [thing]. Still doesn't change who you really are. Still doesn't change the fact that I love you, no matter what.
Starbuck: ...You are a better person than I am, Sam, because if I found out that you were a Cylon, I would put a bullet between your eyes.
— Battlestar Galactica
Advertisement:

Alice has been going through some rough times lately. She discovered something about herself — something about her interests, preferences, or even species — that wasn't exactly conventional. It could range from the silly, like being a fan of a bad sports team; to the serious, like being a lesbian; or the fantastic, like being something other than human. This discovery caused Alice a fair amount of personal anguish, but eventually she came to accept it.

This trope is about the fact that she's now keeping a huge secret from those around her, and she wants to let it out rather than live a lie. Complicating matters is that mainstream society (or at least her social circle) does not approve of the group to which Alice now belongs. To them, "those people" are acceptable targets for mockery, violence, or worse.

So she tests the current by floating out a metaphorical balloon to find out what happens — asking her dear friend Bob a Trial Balloon Question. She asks (hypothetically, of course) if he would still love her if she turned out to be a member of this new group. What she hopes is to hear that The Power of Friendship would overcome this social obstacle — but what she often hears is that he'd be the first in line to cut off her head.

The truth about Alice will eventually come out, forcing Bob to decide if he loves her for who rather than what she is. If enough people reject her before and after the revelation, she may switch factions entirely either due to disillusionment or for simple survival.

If the answer to Alice's question "Would you still love me?" is "Mostly", expect it to be followed with Have You Tried Not Being a Monster?

If the answer is "Of course I'd still love you," Bob's actual reaction when learning the truth could still go either way. He may have an unrealistic picture of his own prejudices.

The only safe answer is "Meh," really, as it would mean Bob couldn't care less, and this really wouldn't change anything at all.

Due to prejudice this trope can be Truth in Television for some people, notably LGBT folks who field a hypothetical question about another LGBT person to gauge the safety of coming out to someone before doing so.

Compare I Have This Friend, Comic Role Play, Rhetorical Question Blunder. Not to be confused with the Armor-Piercing Question, where the one posing the questions is trying to force a realization in another (hence "armor piercing").

The Onion anchor is very curious about the ambiguities of manslaughter laws.

The Onion anchor is very curious about the ambiguities of manslaughter laws.