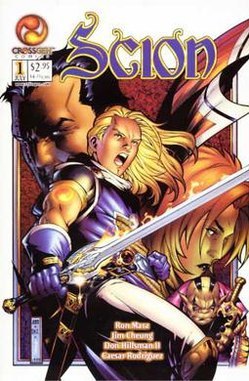 Scion was a Comic Book series published by CrossGen. Set on the world of Avalon, which superficially resembles a conventional fantasy setting but with high tech instead of magic, the series follows Ethan, the youngest prince of the Heron Dynasty, as he incurs the wrath of the Raven prince Bron and falls in love with Bron's sister Ashleigh, who recruits him to a movement to free the Lesser Races, genetically engineered slaves and servants in both countries.

The series has been re-collected in the following trade paperbacks: