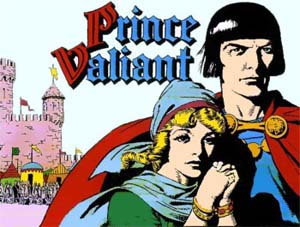 Prince Valiant in the Days of King Arthur is a comic strip created by Hal Foster, run by King Features Syndicate from 1937 to the present (Foster's last drawn strip was in 1971, though he continued to do scripting until 1980), that recounted the adventures of the eponymous Norse prince and his family and friends. The comic came out only in the Sunday paper and featured narration juxtaposed with illustrations rather than the usual thought and speech balloons. During most of Hal Foster's lifetime it occupied one whole page of the Sunday funnies. In the 90s it spun off into a Marvel Comics limited series not set in Marvel continuity.

As the title would suggest, the comic is set during the time of King Arthur and though it does take liberties with history it is notable among modern era Arthuriana for being set firmly in the fifth century (the actual time period Arthur is supposed to have lived), avoiding at least some of the usual anachronistic trappings (the key word here being some. Later medieval concepts like knights and chivalry are featured heavily, but at least no one is wearing plate armour). "Val's" adventures took him to many exotic locations from his native Thule to China, India and even the jungles of Africa. Prince Valiant was notable for its exquisitely detailed and graceful artwork, its strong story-lines, and its idealization of the themes of adventure, chivalry, and Courtly Love (we did say most).

There have been two live action film versions, Prince Valiant (1954), starring Robert Wagner, and Prince Valiant (1997), starring Stephen Moyer and Katherine Heigl. An Animated Adaptation, The Legend of Prince Valiant, with Robbie Benson voicing the title role, aired in 1991 on what was then The Family Channel. It also inspired the Prince Valiant: The Story-Telling Game Tabletop RPG which was more oriented towards storytelling than Hack and Slash Dungeons & Dragons-style roleplay. He's also been a part of the King/Dynamite comic book Shared Universe, alongside fellow King Features action heroes Flash Gordon, Mandrake the Magician, The Phantom, and Jungle Jim.

The sweet prince's trademark black hair-helmet has passed into tonsorial folklore as "the Prince Valiant" (or pageboy) haircut.

Not to be confused with Little Norse Prince Valiant, the English dub of Horus: Prince of the Sun.

Tropes associated with Prince Valiant include: