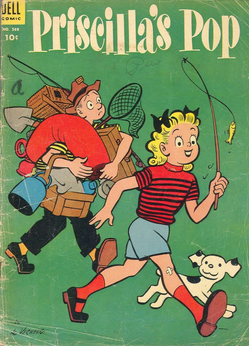 Priscilla's Pop was a newspaper comic strip created by Al Vermeer. It was launched in 1946 and ended in 1983. Vermeer retired from drawing the strip in 1976 and was succeeded by Ed Sullivan. It was syndicated by the Newspaper Enterprise Association.
Advertisement:

This gag-a-day comic strip focused on Priscilla Nutchell, her family, and her friends. Priscilla is a schoolgirl who begs to have her own horse and likes to spend excess money. Her father, Waldo (the "Pop" in the title), saves money by eating mashed potato sandwiches. Also in the family, Hazel is the mother and Carlyle is the son and elder child. Priscilla's friends are Hollyhock, who enjoys reading books; Stuart, who is bitter at Hollyhock, and Jenny Lu.

The comic strip also had a couple of color comic books in The '50s.