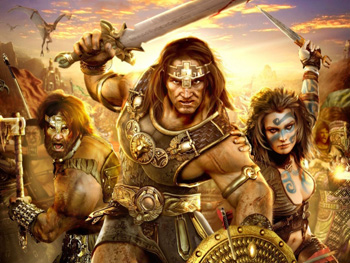 You no longer need to ask what's worse than one angry barbarian.
Advertisement:

The Barbarian Tribe is usually portrayed as a band of barely literate and often chaotic warriors, typically Northern European or Central Asian in origin. They have no problem burning villages, dog-kicking, playing polo with severed heads, and even stealing cable. In a work of fiction, they may form the mook army of the Dark Lord, Evil Prince, or religious fanatic. To fit their comparatively primitive status, they will wear rough clothing, like a Loincloth and Pelts of the Barbarian.

If the work of fiction wants to portray them positively, they will be composed of Proud Warrior Race Guys or Noble Savages who are in touch with the environment. A Barbarian Hero will originate in one of these tribes.

This is Truth in Television to an extent, since one of the main thrusts of history in Eurasia (until the advent of gunpowder weapons) was the periodic invasions of urban areas in China and Europe by mounted steppe tribes. Many other groups of people, such as the ancient Germanic peoples (this includes Norse raiders), Native American tribes and tribal Africans, could also be considered this.

On the other hand, Claude Levi-Strauss said the only real barbarians are the ones who believe in barbariansnote Which would make him a barbarian.... The Ancient Greeks, who invented the term, applied it pretty liberally to anyone they didn't like, including peoples who were quite civilized by any reasonable standard (like the Egyptians and the Persians) and even other Greeks who didn't live up to Athenian idealsnote Though its worth noting that the original context of the word meant "foreigner", rather than "uncivilized". A modern work that applies Character Development to its barbarians may quickly find them to be not that different.

See The Horde (when they are portrayed as Always Chaotic Evil), Hordes from the East, Born in the Saddle.

The Sufficiently Advanced often compare those "below" them to this. Soldier vs. Warrior will often have Barbarians being the "warrior" side in contrast to "soldiers" such as Roman Legionnaires.

Where Ronal hails from, their origins are explained in the start.

Where Ronal hails from, their origins are explained in the start.