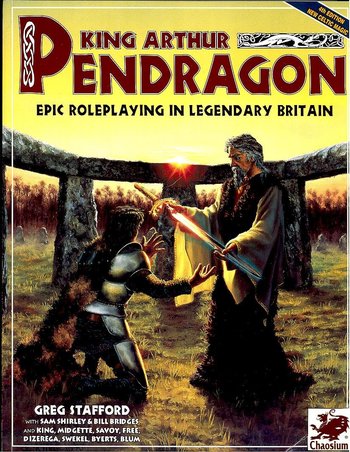 King Arthur Pendragon (usually just called Pendragon by fans) is a roleplaying game first published in 1985 and currently on its fifth edition. In it, players take on the roles of knights in a mythic version of medieval Britain, living through the events of King Uther Pendragon's reign, then the Anarchy that follows upon his death, and finally the reign of King Arthur himself up until his final death. The characters and setting are based heavily on Sir Thomas Malory's Le Morte d'Arthur, but with inspiration drawn from a number of other modern and historical incarnations of the mythos as well, including The Mists of Avalon, The Merlin Trilogy and The Once and Future King.

Unlike most roleplaying games, Pendragon is meant to be played on a quick time scale, with one year going by with every two or three roleplaying sessions. It is assumed that the player characters will spend each summer going to war, having adventures, and other "normal" activities for characters in a roleplaying game, whereas the winter is devoted to the "Winter Phase" of estate management and family events. Since a campaign based on the full King Arthur legend takes place over the course of 82 years, no one character is expected to be able to live through it all — instead, it is assumed that characters will eventually die and their players will take on the role of their heirs to continue the game.

While the setting is more detailed and inspired by real history than most fantasy roleplaying settings, it is by no means historically accurate, which the books freely admit — it is rife with Schizo Tech and legendary fictions (like the presence of a native British Christian Church, founded by Joseph of Arimathea, already existing in Britain before the arrival of the Romans, as well as Jesus having visited Britain in his youth) being treated with the same seriousness as historical facts. In particular, social and technological progress in the game's timeline have been vastly accelerated, so that while at the start of the game in AD 485 the world corresponds roughly to the same period in real-world history, at King Arthur's death in AD 566 it more resembles the fifteenth century.

In addition to the below tropes, the game of course contains just about every trope listed on the page for Arthurian Legend as a whole.