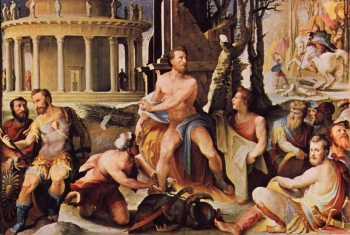 From the Seven Political Virtues in Siena's Palazzo Pubblico.
Advertisement:

The Seven Heavenly Virtues is a classic interpretation of seven basic concepts that will lead your soul to glory. They differ somewhat from the three theological virtues (love, hope, faith) and the four cardinal virtues (prudence, justice, temperance and fortitude) combined.

In alphabetical order, here are the big seven (each of which conveniently corresponds to one of the Seven Deadly Sins), along with some trope examples demonstrating each. Note that this is just one list; there are plenty of others, as shown below.

If one is to consider the optional "eighth Deadly Sin" of Despair added by Orthodox Christianity to be canon, then logically, its corresponding Virtue will be Hope which is like Diligence in that it involves not giving up or stopping, but whereas Diligence would embody those who continue their arduous tasks despite their growing despair and doubt, Hope would embody not even having said doubt or despair in the first place. And where Diligence encompasses the avoidance of laziness and idleness, Hope would embody the resistance of more grave woes like depression, cowardice, and in some cases, suicide. An example of diligence without hope would be a combatant putting all of their hardest effort into their uphill battle against their foe despite believing in their hearts that they will ultimately lose in the end - a hardworking defeatist. On the other hand, an example of hope without diligence would be being so blindly sure of one's apparently "certain" victory that they don't even put their full effort into trying - a lazy optimist. Similarly to how its corresponding vice often gets lumped in with Sloth for being too similar, the same tends to happen with Hope and Diligence. It doesn't help that Hope as a Holy Virtue is far less popular than its sinful counterpart Despair, thanks in no part to the popularity of the Deadly Sins overshadowing that of the Heavenly Virtues.

Other virtues such as Justice or Faith are sometimes substituted for one of the others. The actual list is flexible, but the number seven is the important thing in direct contrast to the Seven Deadly Sins. Faith, particularly, serves as the opposite number to Despair (the eighth deadly sin according to Orthodox Christianity).

Subtrope of Virtue/Vice Codification. For the living personification of these (or other) virtues, see Embodiment of Virtue. For the Evil Counterpart, see Seven Deadly Sins. See also The Cardinal Virtues.