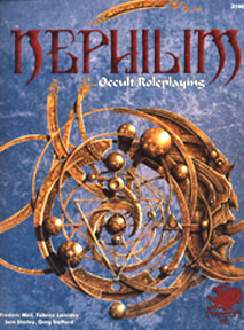 Everyone loves conspiracy theories. Everyone loves cracked-up stories about the hidden history behind History. For all we know, Beethoven Was an Alien Spy... I know! How about we made a role-playing tabletop game based on the sole purpose of perpetrating this trope, with magic entities trying to take over the world through secret societies?

This seems to have been the idea at the origin of Nephilim, created in 1992 by the french publisher house Multisim. The game would prove popular among experienced gamemasters, but its difficulty also made it quite obscure to the eyes of the more casual gamers. The first edition was published in 1992, followed by a second edition in 1996 which revised the rules and continued the metaplot, leading into a 3rd edition in 2001 that dispensed with the BRP system all together for a d20-based system that described attributes using words instead of numbers. Multisim then went into bankruptcy around 2003 during the French RPG industry crash, putting an end to the legacy of Nephilim and the rights to which have been floating in legal limbo ever since. Its rights were however bought back by Ubik / Edge Entertainment who published an introductory scenario to the 3rd edition called Nephilim: Initiation in 2007. In late 2012, a 4th edition was announced

to commemorate the game's 20th anniversary.

In the mid-to-late 1990s, Chaosium would publish an English adaptation of the first edition rulebook with mostly minor changes, but later supplements were developed entirely in-house, resulting in significant divergences ruleswise and storywise from the source material. Unfortunately, the English adaptation of the game was canceled after only a few books were published due to low sales. Some of the writers got together to write a 2nd edition, but plans for this fizzled out. Meanwhile, the original Chaosium adaptation of the game is still available at DriveThruRPG.

According to the game, the universe is run by various magic forces (Ka), which, colliding with each other, made the world as we know it. Earth is subjected to five main elemental forces: water, fire, earth, air and moon. It was first the home of KaÏm (union of different elements, with a consciousness) and Saurians (actually the dinosaurs... except they were ultra-intelligent and mastered the Moon-Ka). The Saurians, in their madness, decided to create a new Ka, the Black Moon, which threatened the equilibrium of the planet, forcing the Nephilim to plan their annihilation. Now sole masters of the Earth, some Nephilim reunited in the artificial Island of Atlantis, attempting to induce consciousness in various animals, and therefore creating the homo sapiens as we know it, through vicious experiments. Shortly after, a giant meteor filled with an unknown Ka (Orichalka) hit the Earth; this Ka was so incompatible with the KaÏm's constitution it nearly destroyed them and forced them to possess human bodies and take over their real owner's consciousness, changing bodies as time passed. Humans, however, had seized the opportunity to get rid of the KaÏm's tyranny: their secret societies fabricated weapons made of Orichalka, forcing them to make their existence a secret.

The rest of History is then revealed to be the result of a confusing and ruthless struggle between the Nephilim and the Humans aware of their existence... Or amongst these two groups, as their secret societies have very different goals.

Most typically, the player is entitled to play a Nephilim, a wandering magic spirit who has lived many different lives at various times in History. You can even play as an historical figure, as long as it doesn't contradict the original background of the game. Most of the scenarios involve the player characters caught in a conflict of interest between two secret societies (of which they can become a member), interested in investigating an historical mystery, or dealing with resurfacing figures of their shadowy past. Though most scenarios revolve around 1999 AD, it is possible to play at any historical period.

Tropes in this System: