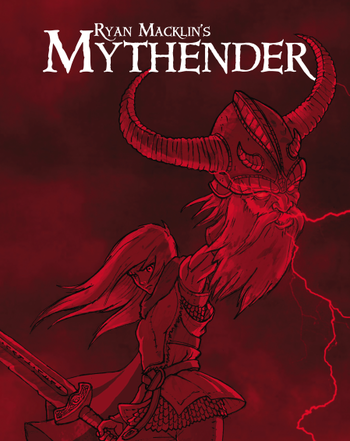 Hey, the bastard had it coming!

Mythender is a high-action adventure game by Ryan Macklin where you play amazing, Mythic heroes — called Mythenders — who travel the Mythic World to destroy its gods and monsters. Because, hey, why not? It's all about leaping off of mountains with your massive, flaming sword drawn and splitting open a giant's face.

At least, it was a face before you showed up to fix that.

Badassery has its cost, though. By drawing on the Mythic Heart that grants them their powers, Mythenders assemble Corruption, making them increasingly monstrous and bringing closer the day when they lose their last shred of humanity and become Myths themselves. A longer campaign of Mythender will almost certainly involve the players being forced to hunt down and kill their previous characters.

, with the paid version providing a softcover print copy.