The Dinosaurs Had It Coming 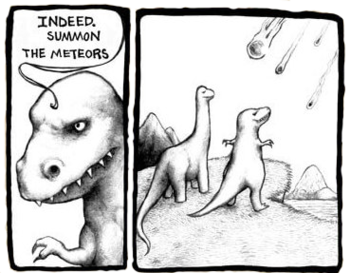 Manny: Mammoths can't go extinct! They're the biggest things on earth!
Gastornis: Well, what about the dinosaurs?
Manny: The dinosaurs got cocky. They made enemies!
— Ice Age: The Meltdown
Advertisement:

Maybe what killed all the dinosaurs wasn't a meteor, or a flood, a drought, or any other sort of geological event that might have happened 65 million years ago. Maybe it wasn't even due to powerful aliens intervening or time-travelers messing around.

No, some writers prefer the theory that the dinosaurs were responsible for their own extinction. They were too stupid to take sensible precautions for their future survival, or were intelligent enough to develop the means of their own destruction. Either way, this provides a lesson for the human race and other sapient species if they want to avoid the same fate, though paleontologists might not believe the story. See also The Cretaceous Is Always Doomed.