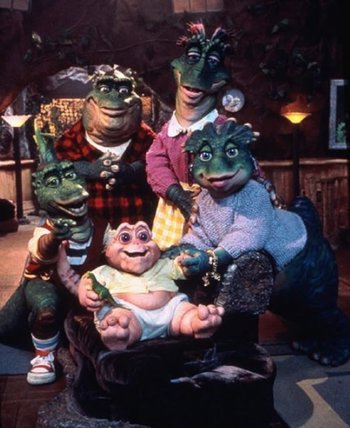 Dinosaurs is a puppet-based sitcom created by Michael Jacobs and Bob Young, which aired on ABC from 1990–94. At its core, it has the aesthetic of The Flintstones (only the family consists of dinosaurs, not prehistoric humans) and a more family-friendly (ie, less subtle) brand of the kind of social satire seen on All in the Family and The Simpsons.

The show followed the adventures of the Sinclair family: Earl, the not-too-bright blue-collar dad who works as a tree pusher for the WESAYSO Corporation; his long-suffering wife Fran; his grouchy mother-in-law Ethyl; and their three kids: rebellious teenager Robbie; naïve middle daughter Charlene; and annoying younger sibling Baby. Many of the episodes were allegories of modern social issues such as bullying, puberty, the environment (a major issue dealt with on the show, if the last episode is indicative of anything), war, sexual harassment/discrimination, government incompetence, corporate greed and corruption, indecency in the media, racism, cultural appropriation, animal rights, religion, and women's rights.

The series was the final project to be overseen by Jim Henson, who died when the series was in development. The pilot is dedicated to his memory.