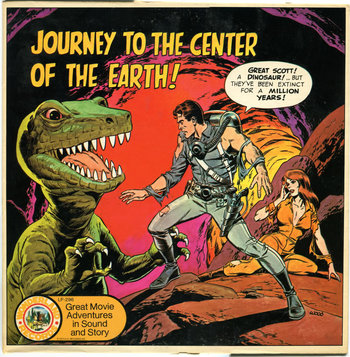 Wait, a million? Somewhere A Paleontologist Is Crying.
Some writers think Everything's Better with Dinosaurs, but in this case dinosaurs were not brought back with cloning technology nor due to time travel. Non-avian dinosaurs just survive the mass KT extinction up until modern (or even future) times.
Advertisement:

As dinosaurs are pretty well known, the in-universe explanation for them to be mostly undiscovered all this time often involves a Lost World somewhere in the far and unexplored regions of Earth, or even Beneath the Earth or inside a Hollow World, where dinosaurs manage to remain untouched, or in some cases, on a different planet. In some cases they evolved into something new, often Reptilian Conspiracy or Ultraterrestrials.

Although this trope uses the term dinosaur, due to Artistic License – Paleontology it is not uncommon that non-dinosaur prehistoric beasts may also be included as examples, like plesiosaurs and pterosaurs. But remember, dinosaurs and cavemen living together was a common trope in old media, but is more a case of Critical Research Failure than the intentional use of this trope.

A Sub-Trope of Not So Extinct, and very commonly use in works with Our Cryptids Are More Mysterious; supertrope to Mokele-Mbembe. Compare with Stock Ness Monster (often portrayed as a surviving plesiosaur) and Dinosaurs Are Dragons (for the idea that dinosaurs actually inspired the dragon myth). Domesticated Dinosaurs maybe result if people manage to tame them. Overlaps with Medieval Prehistory in works that use a real medieval setting (as opposed to a medievalish fantasy land).