I Just Shot Marvin in the Face 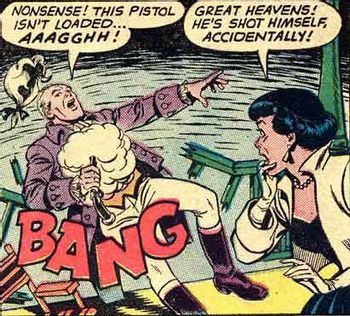 Vincent: Oh man, I shot Marvin in the face.
Jules: Why the fuck did you do that?!
Vincent: Man, I didn't mean to do it! It was an accident!
— Pulp Fiction
Advertisement:

Guns are weapons. That's why there're various rules for safely handling them. When these rules are not followed, whether it be by supposed experts or untrained John Q. Dumbass, there's a chance for an unwanted discharge. That's when somebody gets shot. Sometimes in the face. Being named Marvin is rare, however. Either way, it's not funny the same way that Juggling Loaded Guns is, because somebody just got shot. We mean, it can still be funny (hilarious, even!), but on the other hand, somebody did just get wounded or killed.

This trope occurs when somebody didn't follow the Gun Safety requirements or simply has a shoddy weapon that goes off, hurting, killing or destroying a lot of property, and the gunshot is not played for comedy.

It gets better when the accidental shootings that result from this mishandling of weapons are plot points, as these kinds of accidents are precisely why the safety rules are in place.

The precise rules on the safe operation of firearms vary from one organization to another, but the most common points can be read at our Useful Notes on Gun Safety page.

This trope is named after Vincent's line in Pulp Fiction after he exhibits staggering incompetence with basic firearms safety, resulting in things getting worse for him and Jules, and much worse for Marvin. See the entry in the Film folder for details.

This is frequently the result of some combination of Reckless Gun Usage, Artistic License – Gun Safety, and Reliably Unreliable Guns, as well as a common tool for delivering An Aesop on gun safety. Compare Juggling Loaded Guns for when somebody getting shot by accident is due to Rule of Funny. Make It Look Like an Accident is a common subversion, where it only seems accidental at first glance. This trope frequently overlaps with Murder by Mistake, Accidental Murder or I Didn't Mean to Kill Him, depending on the level of hostility of the gun-toting moron in question. If the person who ends up dead is the gun holder, then this trope overlaps with Accidental Suicide.

When it may not have been accidental, it is Unfriendly Fire. When there is no effect, it is Friendly Fireproof. See also; Surprisingly Realistic Outcome, which goes hand-in-hand with this trope as the realistic end result of gun safety failure.

I just shot Marvin in the face

I just shot Marvin in the face