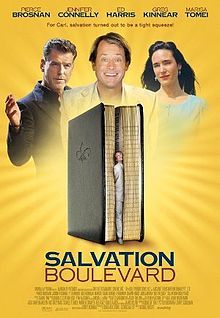 Salvation Boulevard is a 2011 Comedy / Drama film starring Pierce Brosnan, Jennifer Connelly, Ed Harris, Greg Kinnear, Marisa Tomei, Isabelle Fuhrman, and Jim Gaffigan. Carl Vandemeer (Kinnear) is an ex-Deadhead, married to Gwen (Connelly), and attends the Church of the Third Millenium, a mega-church headed by the charismatic Pastor Dan Day (Brosnan). After a post-debate nightcap with atheist professor Dr. Paul Blaylock (Harris) goes horribly wrong, Carl attempts to do the right thing, and finds that the church which has been his support for all of these years may have become his enemy.