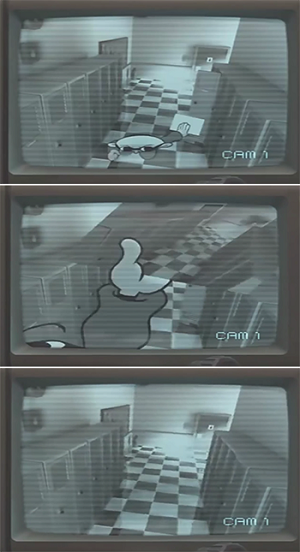 She went into the changing alcove while I spystopped. I found a new active camera and managed to remotely access its feed while my back was to it. Geeta fluttered back into the cabin in her exercise clothes, talked about her adventures, then started her nightly routine. Three repetitions in, I created a loop and sent the camera into nontime.
— Futures in the Memories Market, by Nina Hoffman

In order to fool a particularly inept Mook, our heroes must covertly make themselves invisible to a security camera. They replace the camera's view with an image of the same scene, so the ever-watchful officer will never notice.

There are two basic variants:

The Polaroid Punk — The heroes take an instant photograph from the camera's perspective and then place it in front of the camera. This may or may not require blocking or removing the camera in the process, but even if it does, the security officer on duty will dismiss it as just a temporary glitch, because the image is back, showing no activity, before they can investigate. Whether or not (or exactly how long) this works depends on a number of factors, such as whether the security camera is capable of focusing that close to its own lens (otherwise the photo will be horribly blurred out) how well-illuminated the picture is (especially compared to the scene it's imitating), and whether or not there's any ambient movement (such as outside traffic or a flowing fountain) that normally should be in the scene — because the guard might catch on that the image is too still to be a live feed.

The Splice and Dice — The tech pro on the team manages (by means of infiltrating and/or hacking) to capture some amount of live camera footage, then feeds the recorded footage to the security monitors in an endless loop. This avoids some of the problems posed by taking a still photograph, but if the footage contains any activity (as in the case of Speed) the guard may eventually notice that the same activity is looping over and over and catch on.

Note that it doesn't matter if the camera is a rotating one: It just makes it harder, but eventually the tech guy will sync the loop with the camera's movement, or the photo guy will put a curved panoramic shot in front of it.

In either case, the deception will inevitably break down, alerting the guards to the prank at some dramatic moment.