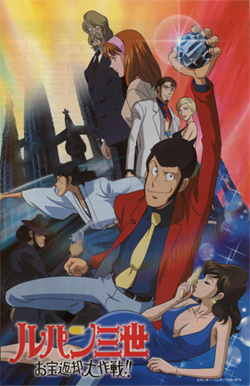 Lupin III: Operation: Return the Treasurenote お宝返却大作戦!! (Otakara Henkyaku Dai-sakusen) is the fifteenth Lupin III Made-for-TV Movie. Directed by Jun Kawagoe, who worked on storyboards for several of the previous specials, it was originally shown on August 1, 2003, and has yet to have an English language release.

Famous thief Mark Williams has passed on, but still asks one favor of his longtime rival Lupin III. Using Fujiko as a proxy, he wants his peer to return six priceless treasures he stole to their original places within seven days. If Lupin does so, he will be told the hiding place of the Trick Diamond, a mysterious meteorite with ties to the Sagrada Família in Barcelona; combined, the two are said to be the key to an unimaginable treasure.

Naturally, Lupin is not the only interested party. Ruthless Russian mafioso Ian "Rats" Krochvich is also interested in acquiring the Trick Diamond and its secrets. His gang, lead by his violent and ruthless girlfriend Misha and The Dragon Tokarev, follow Lupin’s every move, hoping to stop the thief from succeeding in snagging the diamond first. As time runs down, Lupin is deprived of his allies and his enemies become more desperate. Will the master thief survive long enough to get his hands on the Trick Diamond, let alone the fantastic treasure it hides?