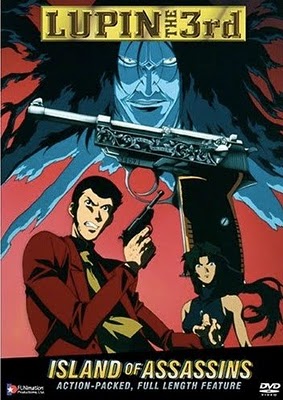 Lupin III: Island of Assassins, with the original Japanese title In Memory of the Walther P-38, is the ninth of the Lupin III Yearly Specials, and was released in 1997. It was directed by Toshiya Shinohara and Hiroyuki Yano, who also helped co-direct Lupin III: Dead or Alive alongside Monkey Punch. It has been released in English by Funimation as a single disc in 2005 and as part of the "Final Haul" boxset in 2006. In 2016, Discotek Media announced that they were doing a re-release in the future, which arrived a year later on Blu-Ray.

Inspector Zenigata has been called to a millionaire's elaborate birthday affair by one of Lupin's infamous calling cards, but when the titular thief arrives and is surrounded, he claims he didn't send it! As he attempts to escape, the mansion is suddenly raided by unknown assailants, the guards murdered, and the host assassinated. Zenigata eventually corners his longtime rival in the chaos, but ends up shot by someone wielding an elaborately decorated Walther P-38.

Furious at Zenigata's shooting and recognizing the gun that did it as one once belonging to him, Lupin finds out the identity of the mystery assailants: Tarantula, a network of world-renowned assassins. They live on an unmarked island together, kept in check by a special tarantula tattoo; if an assassin is away from the special gases native to the island for too long, they will slowly be poisoned by it. He and Fujiko go there and are branded by the assassins, becoming part of their organization. They, along with the behind-the-scenes Jigen and Goemon, become entwined with an impending island rebellion, the complex scheme of Tarantula's mastermind, and, most importantly, the mystery wielder of the gun from Lupin's past. With help from Elen, an assassin seeking revenge for the death of her brother, Lupin and his gang must find a way to stop Tarantula for good.