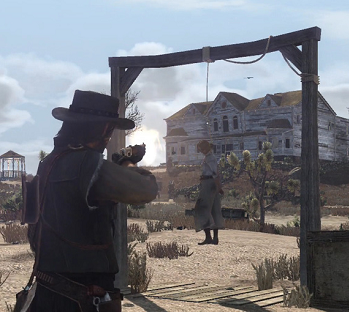 The hero's been led to the gallows and is about to do the metaphorical "hemp fandango". He looks pretty much boned, right? Nope, The Cavalry! They'll save him by splitting the rope on the noose with a well-timed arrow (or a blade, or a bullet, if the time period's a bit later), just as he's about to take a long drop on a short rope. Oh, and bonus points if this dramatically super accurate shot comes directly after a firefight in which A-Team Firing was in full effect. A subtrope of Improbable Aiming Skills.

Well, you know what they say. No noose is good noose.

A comedic subversion of this has the arrow not quite split the rope all the way, leaving the victim dangling (and strangling) until his rescuers can finish the job.

In Real Life, this is much less likely to happen than in fiction. First of all, in the nineteenth century, we figured out that hanging from a higher altitude can kill instantly by breaking the neck, and since then the majority of hangings are done in this way, with only particularly sadistic or incompetent executioners using short drops. Second, even if the victim survives the initial drop, they may struggle or convulse while suffocating, causing the rope to twitch and bounce around and making the already thin target even harder to hit. Despite all this, cutting a rope with a bullet is not completely impossible

... so long as you manage to hit the rope in the first place. A better solution is just to shoot the hangman.