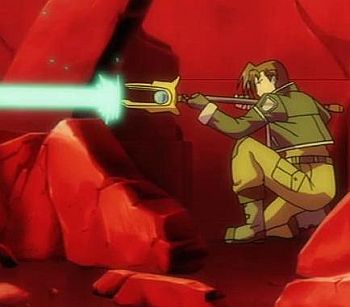 A subtrope of Simple Staff.

The Boom Stick is the high-tech or magical variant of the Simple Staff. Essentially a staff-shaped gun that fires projectiles or, more often, energy blasts. If of the magical variety, it can be a "focus" for the user's magic power, making it easier to fire magic bolts (though the user is still perfectly capable of using just his hands). Often gives a regal flair to the user, and is handy to use in melee if needed. Of course, such a weapon is unwieldy and hard to aim. What differentiates the Boom Stick from the Magic Wand is that the Boom Stick is not necessarily magical and is really just for shooting people. If it is capable of regular spells, it's a Magic Staff.

The name of this trope is a play on "This Is My Boomstick", but is otherwise unrelated. May also be a Swiss Army Weapon.