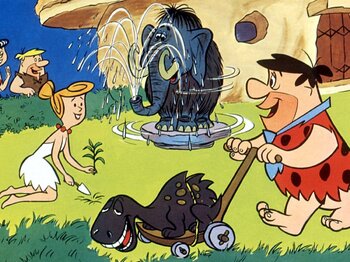 And there's more where that came from.
Barney Rubble, laughing like a hyena
Barney Rubble, what a little wiener
Where's Wilma, anybody seen her?
Got a baby elephant vacuum cleaner
—Weird Al, Bedrock Anthem
Advertisement:

In a setting which is not particularly close to reality, the lifestyles of the characters will also tend to be less like those of the audience. Sometimes, this is intended. Other times, creators will take pains to make the world they're demonstrating more familiar.

A big step in doing this is to include devices and comforts the audience is familiar with and encounters regularly, such as phones, televisions, washing machines, guns. That way, even if the geography is totally alien, and the culture completely unusual, the viewer will have something to connect them with what they know and relate more closely to the cast.

With Science Fiction, this is easy. Common objects can be inserted into the world, given a more technological appearance, a few extra functions, and a weird name. Job done. This works as long as the technology doesn't become woefully archaic over time.

In a fantasy world or a Period Piece, this is harder. Familiar items can still be inserted, creating a Schizo Tech, Anachronism Stew or even Purely Aesthetic Era effect, but this is so jarring that it can actually pull the viewer out of the world they're meant to believe in.

The alternative is to have devices which have the same functions as those we know, but rely on different principles than modern technology. They may be powered by the likes of Magitek, Bamboo, or Steam. They may look completely unusual, but will be used in a way to facilitate the quality of life we recognise as normal, and the characters will regard them as commonplace.