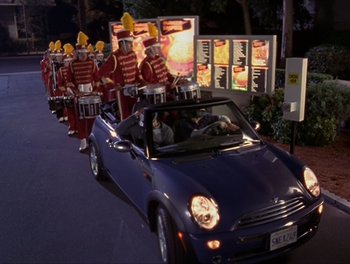 "Yeah, let me get 23 cheeseburgers..."
My wife says "maybe we should park
We could just go eat inside"
I said "I'm wearin' bunny slippers
So I ain't leavin' this ride"
— "Weird Al" Yankovic, "Trapped in the Drive-Thru"
Advertisement:

These are antics for when someone orders from the drive-thru window at the local Burger Fool. Common gags include a Big Eater customer ordering something huge and improbable (with something light to wash it all down), while the employee speaks in a bored monotone over the speaker.

A related trope is Wrong Restaurant, wherein a customer tries to order food that the restaurant doesn't sell. Compare with Toll Booth Antics, where this happens at a toll booth.

The original Alt Text for that page was Chris Hastings asking if any of his readers worked at a drive-thru, and encouraging them to record themselves pulling this stunt on a customer in Real Life. Someone actually did.