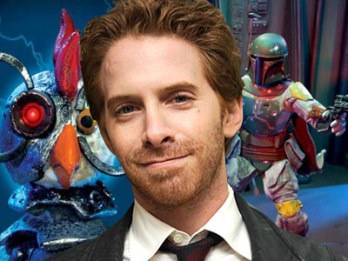 "[...] Every day when I have a really important meeting with, like, ten or twelve gathered heads of department and I'm explaining in detail the difference between the 1982 Snake Eyes and the 1984 Snake Eyes and how critical that's going to be for this skit… I just have to laugh."
—From the 2 May 2012 Nerdist Podcast
Advertisement:

Seth Benjamin Green (born Seth Benjamin Gesshel-Green on February 8, 1974 in Philadelphia, Pennsylvania) is an American actor, writer and director. Seth was born in Philadelphia to Babara and Herbert Green, an artist and a Math teacher respectively. He also has an older sister called Kaela. Seth Green has been acting since the age of six, and is well known for being an accomplished actor.

Seth Green proposed to actress Clare Grant, of the 'Geek and Gamer Girls' viral video, on New Year's Eve 2009, and they married on May 1st, 2010. In August 2011, Seth filed papers to at the Los Angeles Country Superior Court in order to legally shorten his name. He cited that he wished to reflect his professional stage name as the reason for the change. The name Seth Benjamin Green became official and legal on the 20th of October, 2011.

Seth is one of the creators of Robot Chicken, where he also voices many characters and co-founded its primary production studio Stoopid Buddy Studios. He played Scott Evil in the Austin Powers movies, Oz in Buffy the Vampire Slayer, Tyler in Ticks, Mitch from That '70s Show, Duane in Rat Race and Napster in The Italian Job (2003). He voices Chris Griffin in Family Guy as well as Ace Pilot Jeff "Joker" Moreau in the Mass Effect series. He is also the main character of Mars Needs Moms (motion capture/narration onlynote however the full voice track does exist on the Blu-Ray if you know where to look).

Tropes related to Green and his works:

Scott just doesn't get it

Why get a gun when you slowly dip your enemies into a vat of overly agitated sea bass that you will of course go as planned without having to watch it?

Scott just doesn't get it

Why get a gun when you slowly dip your enemies into a vat of overly agitated sea bass that you will of course go as planned without having to watch it?