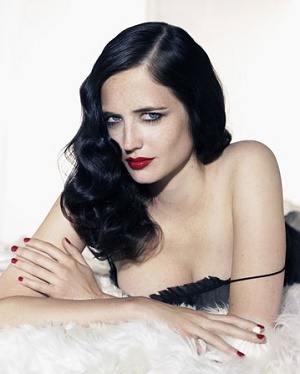 Eva Gaëlle Green (born July 6, 1980 in Paris) is a French actress and model of Sephardic Jewish, Breton and Swedish descent.

She has a slight reputation for being interested in small, arthouse productions and Femme Fatale roles, and does tend to take her kit off in those as well. She gained mainstream recognition as Vesper Lynd, the Love Interest of Daniel Craig's James Bond in Casino Royale.

She is the daughter of actress Marlène Jobert and dentist surgeon Walter Green, and she has a dizygotic twin sister named Joy, who became a horse breeder in Italy. Green is also related to composer Paul Le Flem on her father's side.

Tropes & Trivia related to her works: