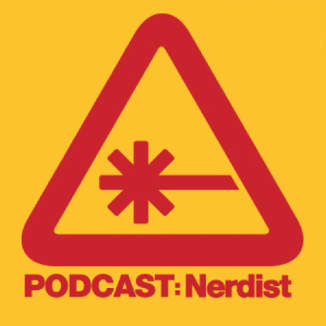 The former official podcast for Nerdist.com

, run by Chris Hardwick. Hosted by Chris, Jonah Ray and Matt Mira, the podcast is released weekly and features a different guest each week. As the name would suggest, both the guests and the topics discussed are often (but not always) quite nerdy. There's now a second podcast each week, although these are without a guest (referred to as hostful rather than guestless).

The guests on the podcast are often comedians, as the three hosts are comedians themselves although a number have been actors or musicians.

Have spun off thirty-two (count'em

, a talk show on BBC America, and a book, all under the aegis of The Nerdist Industries logo.

On February 2018, it was renamed "ID1OT with Chris Hardwick" since Hardwick's contract with Legendary Entertainment had expired. In June 2018, Hardwick was accused of sexual and emotional abuse by his ex-girlfriend during their relationship and then having her blackballed when they broke up. Nerdist Industries responded by releasing a statement saying they were removing all references of his name from the website including his role as founder and the substantive podcast archive. Following an investigation however, Chris's role as founder was re-added to the site after nothing conclusive was found, but the archive of his podcast was not restored.

The podcast contains examples of:

Kylo Ren makes a play for Rey by singing his own version of "Shallow" from a Star is Born.

Kylo Ren makes a play for Rey by singing his own version of "Shallow" from a Star is Born.