Spoilers for all previous Marvel Cinematic Universe works will be left unmarked. 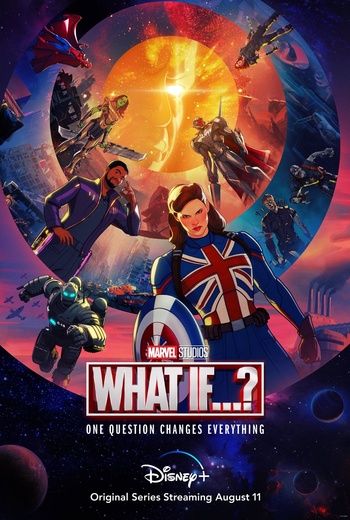 Enter the multiverse of infinite possibilities.
"Time. Space. Reality. It's more than a linear path. It's a prism… of endless possibility… where a single choice can branch out into infinite realities… creating alternate worlds from the ones you know. I am the Watcher. I am your guide through these vast new realities. Follow me… and ponder the question… What If…?"
— The Watcher, in the show's Opening Narration
Advertisement:

What If…? is a superhero Animated Anthology series created for Disney+ by A.C. Bradley (Tales of Arcadia), based on the Marvel Comics title of the same name. The series is the 28th installment of the Marvel Cinematic Universe (and the second in a planned multiverse saga), the 5th installment of Phase 4, the 4th series to be produced for Disney+, and the first animated series set in the universe.

Similar to the comic book it's based on, and set immediately after the events of the first season of Loki, What If…? explores the various alternate realities created from the death of He Who Remains and the resultant fracturing of the Sacred Timeline, showing how the films of the Infinity Saga would have been impacted by certain major events happening differently, while omniscient narrator Uatu the Watcher (voiced by Jeffrey Wright) occasionally weighs in on what he's observing.

Some alternate outcomes in the series include Peggy Carter becoming a super-soldier instead of Steve Rogers, T'Challa becoming Star-Lord instead of Peter Quill, and a Zombie Apocalypse suddenly breaking out in the MCU with Peter Parker becoming leader of the survivors. In addition to Wright as the Watcher, the series features voice acting from many of the same actors of the films, including the likes of Hayley Atwell as Peggy Carter, Samuel L. Jackson as Nick Fury, Benedict Cumberbatch as Doctor Strange, Michael B. Jordan as Killmonger, Chris Hemsworth as Thor, and the late Chadwick Boseman in his final MCU contribution as T'Challa.

While there were many animated series based on Marvel Comics before, What If...? is the first animated title produced by Marvel Studios, and is among the first series to be developed by them for Disney+. The first season debuted on August 11, 2021 and concluded on October 6, and a second season has already been ordered. A spin-off titled Marvel Zombies will continue the story of the episode What If...Zombies?!, itself an adaption of the comic of the same name.

The 2022 comic Captain Carter is a spiritual spinoff from What If...?

What If...? contains examples of:

"Your stories, they are everything to me."
Feedback

Alternative Title(s): What If