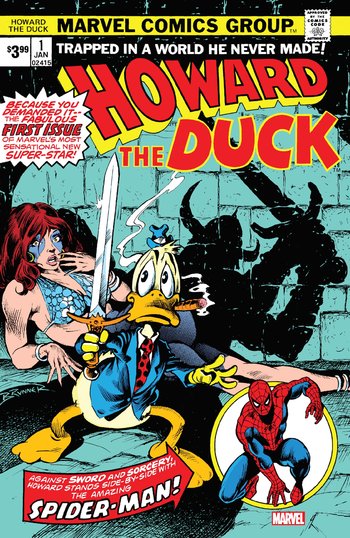 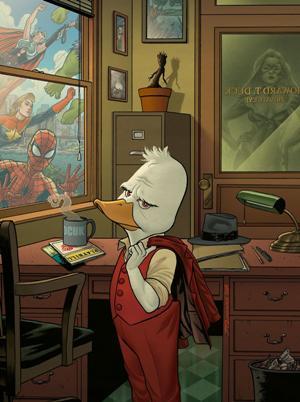 Howard The Duck is one of the strangest comic book characters ever published by Marvel Comics, best known today because of its movie adaptation, believed by many to be one of the worst films ever made; this is unfortunate, as the comic was both funny and full of social criticism, and was one of Marvel's best known titles during the 1970s. While not an underground comic in of itself, Howard the Duck is widely cited as an example of the underground comix movement's influence on mainstream media.

The character was apparently created as a sight gag; in "Adventure into Fear" #19 (December, 1973), in a Man-Thing story involving the "Nexus of All Realities" characters from several universes appeared, many of them being obvious homages to fictional characters such as Conan the Barbarian and (in Howard's case) Donald Duck. However, writer Steve Gerber, known for both his love of strange characters and playing with readers' expectations, decided to continue using Howard, and convinced Marvel to give the character his own series. Although Marvel had to strike a deal with Disney in order to use the character, including such things as requiring Howard to wear pants, the character proved popular, most likely due to Gerber's writing.

Gerber had the "duck" accidentally transported to Cleveland, where the "hairless apes" (as Howard always refers to them) refused to believe he was anything but a midget in a duck costume and treated him as a weirdo. "Trapped in a world he never made" (the series' catchphrase) Howard tried to live a normal life (and got a series of jobs, such as driving a taxi) but kept running into bizarre people and creatures and ended up having to confront them. The vast majority of these were just wannabe supervillains with silly names and goals such as "Doctor Bong" or humorous menaces like a vampiric cow. More importantly, the series used the short-tempered and sarcastic duck as a way to snark on modern human society. At one point, Howard even runs for President of the United States (!) only to retire after a false accusation of having sex with his friend, a human woman named Beverly Switzler.

Howard, despite running into superheroes occasionally, was no superhero himself, and had no superhuman powers (other than the occasional unexpected skill such as "Quack Fu") though he still did end up helping people, directly or indirectly, mostly because of Beverly.

The character's popularity led to his being adapted into the live-action movie, but since other than the Beverly/Howard romance, nothing from the comics made it in, especially not the humor, fans of the character hated it. It was universally poorly-received among critics and fans alike, and was a major flop for Marvel, seemingly killing any chance of more stories involving Howard. Thankfully, time has been kind to him and he makes a cameo appearance in The Stinger of the hit and critically acclaimed film Guardians of the Galaxy, confirming him as a canon part of the Marvel Cinematic Universe continuity. He even got a new ongoing series —his first since The '80s— starting in March 2015, with Chip Zdarsky and Joe Quinones at the helm.

Howard was also the cause of a legal dispute between Marvel and Gerber, who claimed to own the character. This caused Gerber to leave the company and led to many years of legal wranglings; in the end, the situation was settled with Marvel keeping ownership of Howard. Howard has appeared occasionally in various Marvel titles since the 1970s, and a few years ago starred in a miniseries (again by Gerber) that made open references to his sexual relationship with Beverly (it was part of Marvel's adult-oriented MAX line, which may not be a canonical part of the Marvel Universe.) He was one of the major parodied characters in the Amalgam Universe, merged with DC Comics's Lobo as Lobo The Duck. Seriously. He appeared again as an agent of the dimensional-patrolling agency ARMOR in the "Marvel Zombies" comics, starring alongside various heroes such as Aaron Stack, the Machine Man, and also had an appearance in the LEGO Marvel Superheroes game as an unlockable character.

In 2019, it was announced that an adult-oriented Howard the Duck animated series would be airing on Hulu, as part of their nascent The Offenders franchise, alongside shows based on M.O.D.O.K., Dazzler & Tigra, and Hit-Monkey. However, due to Marvel Television getting shut down and absorbed into Marvel Studios, everything sans M.O.D.O.K. (2021) and Hit-Monkey got canned.

Howard the Duck provides examples of: