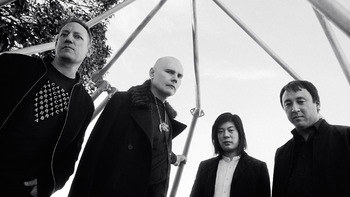 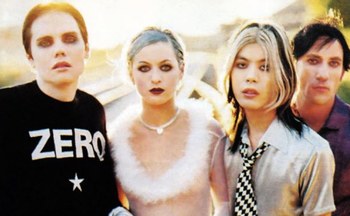 The "classic" lineup.note From L to R: Corgan, D'arcy Wretzky, Iha, Chamberlin
Influences:
Homer Simpson: My kids love you, and thanks to your gloomy music, they've finally stopped dreaming of a future I can't possibly provide.
Billy Corgan: Well, we try to make a difference.
— The Simpsons, "Homerpalooza"
Advertisement:

Formed in 1988, The Smashing Pumpkins are an alternative rock band from the Windy City consisting of singer/songwriter/dictator Billy Corgan. Okay, that's not true; there are usually three or four other band members, but Corgan's the songwriter, lead vocalist and the only member who's been present throughout the band's entire lifespan, so we'll start from there.

The band's original lineup (Corgan, guitarist James Iha, bassist D'arcy Wretzky, drummer Jimmy Chamberlinnote  who joined the band after Cabaret Metro owner Joe Shanahan told Corgan that he would only book the band if they got a drummer instead of using a drum machine) released three albums, two of which were the results of strain due to Corgan's obsessive perfectionism and Chamberlin's drug addiction, among other issues. After the death of session keyboardist Jonathan Melvoin, and the firing and re-hiring of Chamberlin (now drug-free) alongside the quitting of Wretzky, the band produced one more album (well, technically two) before announcing they would break up at the end of 2000.

In 2005, Corgan released his first solo album, The Future Embrace, subsequently upstaging himself by, on the very same day, announcing that he was reforming the Smashing Pumpkins alongside Chamberlin with new members. They released one album (Zeitgeist) before Chamberlin amicably departed, at which point the band focused on a planned 44-song Concept Album named Teargarden by Kaleidyscope, to be released song by song for free on their website

. While 12 of the 44 (including vinyl bonus tracks) saw release, and their next two albums were reportedly parts of the project, thus bringing a total of 34 tracks, TBK as a whole has since been scrapped.

In early 2018, Iha and Chamberlin officially rejoined the bandnote Wretzky was reportedly given the chance to rejoin by Corgan; Corgan rescinded the offer later according to Wretzky, but Wretzky turned down the offer according to Corgan, and there's more proof for the former

, with guitarist Jeff Schroeder (who initially joined the band after their mid-2000s reunion) completing the quartet. They released a new album in November of that year, Shiny and Oh So Bright, Vol. 1 / LP: No Past. No Future. No Sun., which began a new Concept Album series titled Shiny and Oh So Bright and would be followed up two years with Cyr.

In October 22, 2020, two days before the 25th anniversary of Mellon Collie and the Infinite Sadness, Corgan confirmed

that the band are planning to release two new albums after the release of Cyr with the first album being a 33-track double album that will serve as the third and final instalment of a trilogy that began with Mellon Collie and continued in the two-part Machina along with a ten-track third Shiny and Oh So Bright album coming out after it.

There's also a bunch of EP's and compilations like:

"Despite all my tropes I am still just a rat in a cage":

"Let's all go out and buy fur coats!"