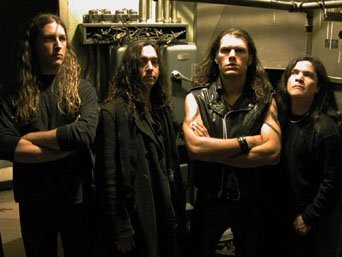 The band during the Traveller era.
Advertisement:

Slough Feg is an American Heavy Metal and Folk Metal band originating from Pennsylvania but currently based in San Fransisco. The band is known for their dramatical lyrics, solo heavy sound, and general retro approach which have earned them comparison to bands like The Sword although Slough Feg have been around for much longer. Originally founded in 1991 the band realesed their independently produced EP in 1996 and have realesed 8 more studio albums since then.