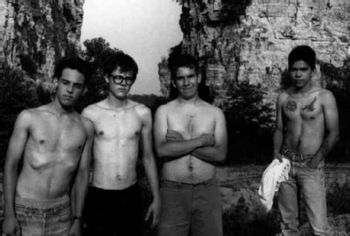 Slint being sexy.
"Here is the typical way a new fan of Slint experiences the band. First you buy Spiderland, because that's the album everyone talks about. And you are blown away by it and vow to purchase everything anyone associated with this band has ever done. So you naturally go to Tweez next. It's not Slint - not your Slint. You buy The Breeders' first album, Pod, because Slint's drummer plays on the record. It's good, but it's not Slint. Meanwhile you've picked up a For Carnation album (ex-Slint!), Tortoise's Millions Now Living Will Never Die (ex-Slint!), and maybe one or two Papa M discs (ex-Slint!) - maybe you even tracked down that Evergreen album (ex-Slint!). They're not Slint."
— Scott Tennant
Advertisement:

Slint is an American Alternative Rock band from Louisville, Kentucky, usually given credit for jump-starting the Post-Rock genre along with Talk Talk, as well as the Math Rock genre. The band formed in 1986 from the ashes of Hardcore Punk group Squirrel Bait, with Brian McMahan (guitar and vocals), David Pajo (guitar), and Britt Walford (drums) staying strong throughout the band's existence. Ethan Buckler, the band's original bassist, would later be replaced with Todd Brashear.

They released their first album, Tweez to lukewarm reviews in 1989. Then, in 1991, they found their style and released their landmark album, Spiderland, which came on the heels of a year of landmark albums along with Nirvana's Nevermind for Grunge, My Bloody Valentine's Loveless for Shoegazing, and so on, and became very influential to Post-Rock alongside Talk Talk's Laughing Stock.

After the album the entire band went through a Creator Breakdown. It is rumored that the brooding sound of Spiderland combined with pressure from the record company caused two of the members to be institutionalized during recording. What makes this especially creepy is the fact that all the band members were in stable mental condition prior to the recording. Nevertheless, this stress affected the band and they disbanded shortly after its release. Pajo went on to join Tortoise and Zwan for a while after that, and Walford was briefly a member of The Breeders.

They've had three reunions. The first was in 2005 and the second in 2007; the only new material was the song "King's Approach", which performed during their 2007 shows. A third reunion began in 2013, and the band has hinted at the possibility of new material. Spiderland has been reissued with two bonus discs.