Music / TV on the Radio 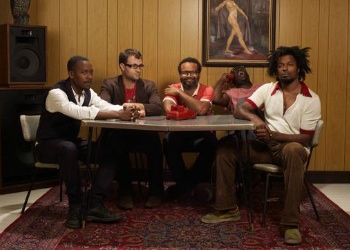 TV on the Radio is a Brooklyn-based band that was formed in 2000. They are known for their Genre-Busting sound, often combining elements of Hip-Hop, Soul, Post-Punk, Electronica, and Alternative Rock into their music.

David Sitek has also produced quite a few albums, including all three of the albums from Yeah Yeah Yeahs. Tunde Adebimpe, for his part, has a respectable sideline as an actor, best known for playing the groom in Rachel Getting Married.

Tropes exhibited by this band include: