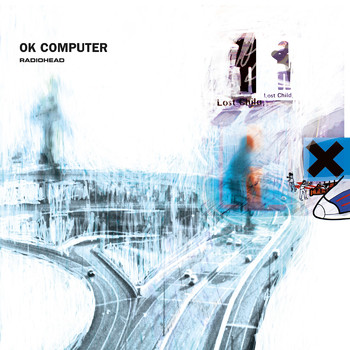 Calm, fitter, healthier, and more productive.
A pig, in a cage, on antibiotics.
"Transport, motorways and tramlines
Starting and then stopping
Taking off and landing
The emptiest of feelings
Disappointed people clinging onto bottles
And when it comes, it's so, so disappointing"
— "Let Down"
Advertisement:

OK Computer is the third album released by Alternative Rock band Radiohead, released in Japan on 21 May 1997 and in the UK 26 days later. Upon its release, the album reached number one in the UK and number 21 in the US, becoming Radiohead's international Breakthrough Hit.

Recorded with the intent of presenting a less introspective sound than The Bends, exchanging the personally-oriented lyricism and downbeat melodies for a more aggressive, sociopolitical approach, OK Computer initiated a shift away from the popular Britpop genre of the time to the more melancholic, atmospheric style of alternative rock. This new sound would be prevalent in the next decade (corroborated by the fact that it released just a few months before Oasis' Be Here Now, widely considered the Genre-Killer for Britpop), and also initiate the band's shift away from their original guitar-heavy approach and into the more experimental territory that defined their subsequent work.

The album's lyrics and artwork emphasize Radiohead's views on rampant consumerism, social alienation, emotional isolation, and political malaise; in this capacity, OK Computer is often interpreted as having prescient insight into the mood of 21st century life. In that sense, the album is often considered a Spiritual Successor to Pink Floyd's own 1973 Breakthrough Hit The Dark Side of the Moon. While Radiohead detested such comparisons, they similarly felt a strong sense of Artist Disillusionment that would result from the album's success, resulting in the even more experimental electronica and jazz directions of their next two albums.

In 2017, the band commemorated the 20th anniversary of OK Computer with OKNOTOK, an expanded and remastered re-release containing both the original 1997 album and an additional disc of bonus material, namely the B-sides for its associated singles plus the previously unreleased songs "I Promise", "Man of War", and "Lift", which themselves were released as singles with their own music videos to promote the re-release.

On a final note, the album's world tour — and more specifically the band's growing ennui and burnout from their newfound superstardom — became the subject of the rockumentary Meeting People is Easy, directed and filmed by Grant Gee, who also directed the video for "No Surprises".

OK Computer was supported by four singles: "Paranoid Android", "Karma Police", "Lucky", and "No Surprises", all of which were radio hits.

Note: Vanilla Edition CD releases are across a single disc

"Please, can you stop the tropes? I'm trying to get some rest:"