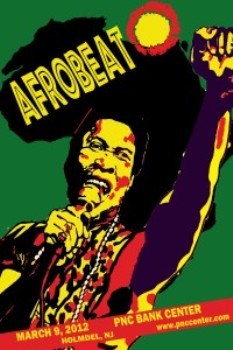 Afrobeat is, as its name implies, a distinctively African musical genre, combining traditional music, Jazz, Funk, Jungle Drums and African Chant vocals. Typical for its distinctive catchy sound is the and conga percussion, horns (saxophone, trumpets, trombones,...), bass, guitar and sometimes keyboards. This creates an endless catchy groove, which can stretch over several minutes, even hours in length. The lead singer will sing various words and sentences, while his backing musicians repeat what he sang.

Trope Namer and Trope Codifier was legendary Nigerian musician Fela Kuti, who coined it after returning from his first US Tour in 1970. He used the new musical genre not only for dancing, but also to provide political and social commentary.

Originally classified as World Music it has nowadays practically become its own genre. It's very fit for grooving and dancing, which explains its influence and popularity on various Jazz and Progressive Rock artists in the West, who've tried to incorporate the sound into some of their own work, such as Roy Ayers, Talking Heads, Paul McCartney, Brian Eno, Stevie Wonder, Radiohead, Blur, TV on the Radio, Glassjaw, Paul Simon (on Graceland),...

Despite the misleadingly similar name, Afrobeat has absolutely no relation to the contemporary African music genre popularly known as Afrobeats (spelled with an s), which is also more accurately known as Afro-fusion or Afropop.