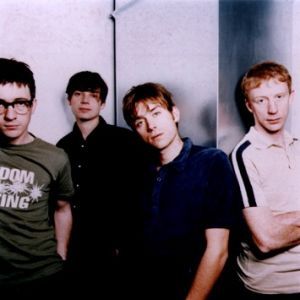 From left to right: Graham Coxon, Alex James, Damon Albarn and Dave Rowntree
"All the people,
So many people,
And they all go hand in hand,
Hand in hand through their,
Parklife.
Know what I mean?"
— "Parklife"
Influences: The Kinks, David Bowie, Pink Floyd, The Small Faces, The Stone Roses, The Jam, The Who, The Beatles, Madness, XTC, Cardiacs, Squeeze, Ian Dury and The Blockheads, The Specials, The Smiths, Sonic Youth, Pavement, Velvet Underground, Syd Barrett, Fela Kuti
Advertisement:

Debuted in 1989 on the Shoegazing and Madchester scenes as Seymour before signing to Food Records under the condition that they change their name to Blur (and, according to fan legend, that drummer Dave Rowntree stop wearing pyjama pants on stage). Soon after released their first album Leisure to moderate success, followed by the very British "Popscene" single and a tour of America to predictable results.

They achieved great success with Parklife a few years later, then switched to noisy, experimental Alternative Rock for the next couple of albums until eventually dissolving after Think Tank sometime around 2004. The original lineup, with Graham Coxon in tow, reunited in 2009 to much anticipation and released a new song, "Fool's Day" in the Spring of 2010. The band released two more new songs - "Under the Westway" and "The Puritan" - in July 2012 and performed at an Olympics closing ceremony concert in Hyde Park in August along-side New Order, The Specials and Bombay Bicycle Club. After a bit of a Troubled Production, they released their first album in 12 years, The Magic Whip on April 27, 2015.

Not to be confused with the video game.