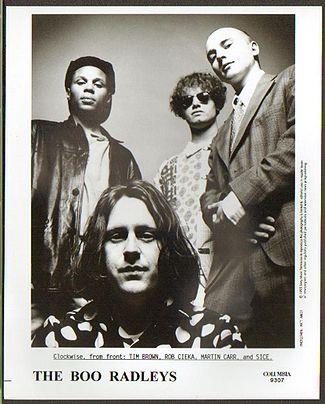 British group of The '90s, named after the character in To Kill a Mockingbird, who started as a Shoegazing band, became eclectic experimentalists, were briefly (and against their will) co-opted into the Britpop movement, and showed more Rock-ist tendencies towards the end. Most remembered by the general public for the hit "Wake Up Boo!".

While definitely considered part of the first wave of shoegaze bands, they lasted much longer than most of their contemporaries (Catherine Wheel being the only band that would last into the 2000s, My Bloody Valentine aside). Depending on what popular music history buff you talk to, they'll either mark their break up, or Catherine Wheel's break up as the marker between First Wave and Second Wave shoegaze bands (or, to complicate things even more, the release of My Vitriol's Finelines in 2001). They reunited in 2021 without original guitarist Martin Carr, and released a single, "A Full Syringe and Memories of You", their first new music since 1998.