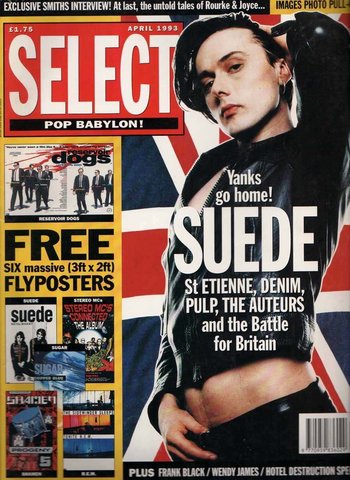 Britpop was a somewhat ill-defined scene in British Alternative Rock in the mid-1990s. When in 1991 Nirvana released "Smells Like Teen Spirit", Grunge quickly took over the British music consciousness: suddenly everyone had long hair and scrappy clothes again. A loose rabble of musicians in Britain took exception to this, and in 1992 Britpop was born - music that was somehow 'British' rather than the American stuff. Blur's "Popscene

" is often cited as the first Britpop song, with Suede's "The Drowners

Despite the eager tagging of bands, what exactly Britpop was is difficult to define. Among the earliest adapters were The Stone Roses in 1989 (who themselves were part of "Madchester", a sort of halfway point between House Music and Britpop), but they never lived up to the promise of their first album. Then there were The La's, who were either twenty years ahead of their time or twenty behind. Manic Street Preachers, a Welsh group that was influenced equally by Glam Rock, Punk Rock and American hard rock, were another early innovator of the Britpop sound (and actually wound up lasting longer than most of the bands that were directly influenced by them).

Indie pop groups who had been around for more than five years, such as The Wedding Present (a band from the north of England whose cult following started to become big enough to actually get their singles into the Top 40), The Lightning Seeds (fronted by Ian Broudie, a founding member of pioneering Post-Punk group Big in Japan) and Denim (a Glam Rock/bubblegum revival band, formed out of the ashes of revered indie outsiders Felt), also began to find attention around this time.

The groups that followed these bands' lead and, in turn, became the leading Britpop bands include:

Additionally, several established British bands, most notably The Charlatans, the aformentioned Lightning Seeds, and Saint Etienne, began to embrace Britpop and gain commercial success as a result. There were also several, smaller groups of varying popularity (and quality) that rode the Britpop wave to a handful of chart singles. Among them are Babybird, Cast (fronted by The La's' John Power), Dodgy, Gene, Geneva, Heavy Stereo (featuring future Oasis member Gem Archer), Longpigs, Mansun, Marion, Menswe@r, My Life Story, Northern Uproar, Powder, Rialto, Salad, The Seahorses (fronted by John Squire), Shampoo, Shed Seven, and These Animal Men. Many of these groups were considered to be Follow the Leader acts to the big names, and many never even managed a blip on the radar outside of the UK, but they all have their own devoted followings to this day.

Around this time, there was also a mini-subculture closely linked with Britpop dubbed Cool Cymru, that focused specifically on artists from Wales and spearheaded by acts such as the Manics, Super Furry Animals, Catatonia, Gorky's Zygotic Mynci, Stereophonics and 60ft Dolls. There was also the harder Britrock scene, championed by Kerrang! magazine and sharing more in common with American alternative rock but with a distinctly British spin. The Manics and Ash also fell into this scene, as did Feeder, Therapy?, Terrorvision and Skunk Anansie.

Britpop came to a head in the summer of '95. That year, Blur and Oasis fought the Battle of Britpop; they released the songs "Country House" and "Roll With It" on the same day, and since no other noteworthy songs were there on that date, it was clear that one of the two would get to #1. Blur won that battle, but Oasis ultimately was the victor by the end of the 90's.

In the end, heaving under the weight of drugs, artist disillusionment, and the continued failure by any band not named Oasis to break America, it collapsed, thanks to four problems. First, the fact that Britpop was very hard to define led many to question whether certain acts, such as The Divine Comedy, truly were "Britpop". Second of all, much like America's Riot Grrrl scene, several sources around that time also didn't really understand what it was and so lumped various British Alternative Rock bands and artists with the movement no matter how tenuous the similarities were, such as Primal Scream, Robbie Williams, the aformentioned Manics and Stone Roses, Genre-Busting bands such as the Super Furries, Space, Stereolab, and even Radiohead. The sheer lack of care or research became excessive.

Then, Oasis's long awaited third album Be Here Now was released. It was (and still is) the fastest selling album in British history, but it was equally quickly sold on to charity shops by disheartened fans and went down in history as an overhyped, dismal flop. Finally, a band called The Verve (whom had existed for several years, but were originally recognised simply as "that Shoegazing act") seemed to be picking up the Britpop crown with their album Urban Hymns which included the worldwide hit "Bitter Sweet Symphony", which seemed to keep the scene alive ... until it became the subject of a lawsuit from ABKCO due to it using a sample from an orchestral version of The Rolling Stones "The Last Time" (it's better to watch this video

to get the full details), stopping the band's career dead and officially killing Britpop. Radiohead, formerly "the ones who did 'Creep'", promptly released OK Computer, a successful album that moved the British Alternative Rock scene away from Britpop and into a more atmospheric and melancholic direction. The rise of the Spice Girls, who were never Britpop but just plain pop, had perfect timing to capitalize on the near-simultaneous collapse of both Britpop and the dying days of grunge/alt-rock.

Oasis chugged along, releasing well selling albums that got alright reviews until the band ended in an yet another squabble between the Gallagher brothers in 2009. Blur had already turned away from the Britpop sound with their self-titled fifth album, which paved the way for much of the Indie Rock scene of the 2000s, and unlike Oasis quit while they were ahead and still at the top of their game in 2003 (albeit two years after guitarist Graham Coxon departed). Pulp continued to release critically adored albums for a few years before completely disappearing. However, both Blur and Pulp have since made comebacks (in 2015 and 2013, respectively). Suede, the last of the four leading Britpop acts, fizzled out in 2003 following a couple of mediocre releases, but came back rejuvenated in 2011 and have been going ever since. Ash and Supergrass, two of the scene's youngest bands, somehow managed to outlive most of their Britpop competition, both becoming major players in the British alternative scene, though the latter split in April 2010 and reformed (as a live act only) in late 2019. Meanwhile, several of the aformentioned smaller bands would also reform during this period, though mostly catering towards the nostalgia/90s revival circuit.

By 1998, the genre had evolved in the form of Post-Britpop, an even less well-defined category that continued to focus on guitar music, but leaned more towards alt rock and the melancholic sound laid out by Radiohead (who in response radically changed their style with the experimental Kid A). This scene was occupied by bands like Travis, Gomez, Placebo, Coldplay, Stereophonics, Elbow, Keane, Feeder, Snow Patrol, Starsailor, Embrace, Doves, and Gay Dad. This scene's popularity with journalists started to to phase out by 2003, who began focusing on the emerging Post-Punk revival, which too eventually faded out— and along with the decline of Post-Grunge, took mainstream rock with it (alongside a myriad of other factors).