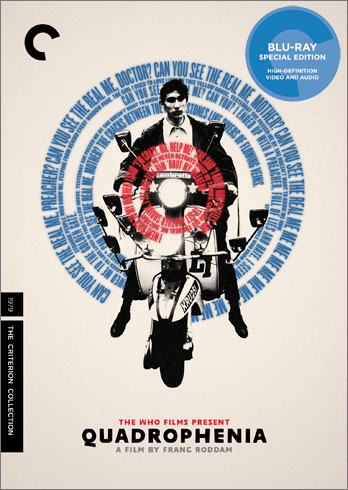 Cover for The Criterion Collection's Blu-ray release.
"Sex, drugs, and rock & roll... nothing ever changes."
—Tagline from one of the DVD boxes
"Look, I don't wanna be the same as everybody else. That's why I'm a Mod, see?"
—Jimmy
Advertisement:

The Movie based on The Who's Concept Album Quadrophenia. Directed by Franc Roddam as his first feature film, it's a looser adaptation than that of Tommy, being a straightforward drama film about teenage angst and gang culture in 1960's Britain instead of a surreal musical. It stars Phil Daniels as the main character Jimmy Cooper, Sting as important mod Ace Face, Ray Winstone as rocker Kevin and Leslie Ash as Steph, Jimmy's girlfriend. The film spawned a soundtrack album, featuring tracks from the album remixed by the Who's bassist John Entwistle.

It joined The Criterion Collection's offerings in 2012.

Being an adaptation of the album, much of the double-LP's plot and accompanying tropes are carried over here. That said, several tropes are exclusive to the movie.