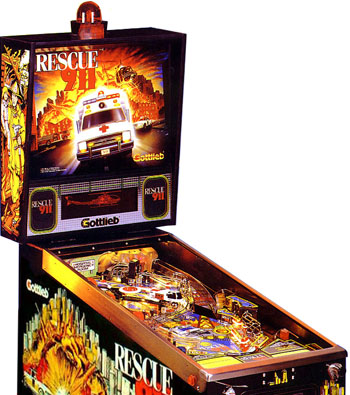 Save lives with the power of pinball!
Advertisement:

From Gottlieb comes the official Rescue 911 pinball game based on the TV show of the same name. Released in 1994, it incorporates a rescue crew motif, complete with a little helicopter that electromagnetically carries the ball to another location. It was designed by Bill Parker, with art by Jeanine and Constantino Mitchell and David Moore.

It does not include host William Shatner's likeness. Instead, what the game offers are six emergency missions, ranging from an Emergency Room baby delivery and a Cave-In, to rescuing people from Flash Floods and Wildfires. Use the Helicopter to fly pinballs to critical areas, collect the Medi-Alert bonuses at the ramp, and try to save enough lives to reach the pulse-pounding "Life Force" Wizard Mode.

Rescue 911 went on to become Gottlieb's best-selling pinball of the year, and remained one of their top Premier tables, right behind Super Mario Bros. and Street Fighter II. Although it's not too taxing for pinball wizards, many players still regard it fondly as a fun and action-packed game, well suited for all audiences.

A digital version is available for The Pinball Arcade.