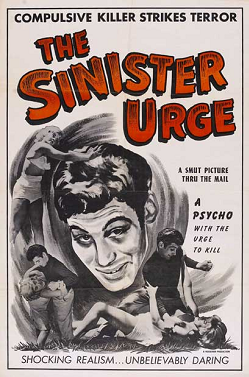 The Sinister Urge is another Ed Wood exploitation piece from 1961. This time, the particular vice covered is pornography, and the attendant evils that come from it.

The Cold Open starts with a girl being chased in the park, and reaching a phone booth to call for the police before being murdered. The clues end up leading a couple of righteous police detectives to a pornography syndicate. Can the syndicate be busted before more girls are killed?

Not to be confused with the Rob Zombie album which took its name from this movie.