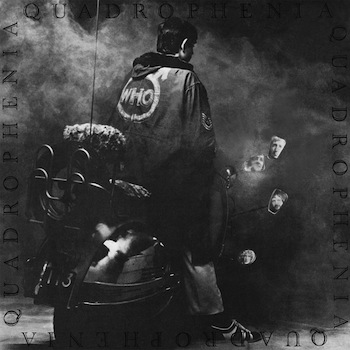 Schizophrenic? I'm bleeding Quadrophenic.
"Can you see the real me,
Can ya? Can ya?"
—"I Am the Sea"
Advertisement:

Quadrophenia is the sixth studio album by The Who, released in 1973. The group's second Rock Opera, Quadrophenia concerns itself with the story of Jimmy, a young Mod living in 1960s England who undergoes something of a spiritual revelation, thanks to The Power of Rock. Or more specifically, loud, progressive-influenced Who songs. The story, such as it is, is really an analysis of the trials and tribulations the British youth of the early 1960s had to endure: girlfriends, fighting to be popular and to fit in, being out of work, drugs, etc.

The plot follows Jimmy's quest for identity as he struggles with life. The opera opens as he sits marooned on a rock in the middle of the English Channel, contemplating what led him there. A large part of the plot is Jimmy looking at the past few days of his life, in particular the Rocker-Mod conflicts that he was a part of, and attempting to reconcile his four different identities-the quadrophenia of the title.

The album was adapted into a 1979 cult film starring Phil Daniels, Leslie Ash, and Sting, featuring the music from the album (touched up with horns and synthesizers), along with a number of Motown tunes.