Film / Phantom of the Paradise 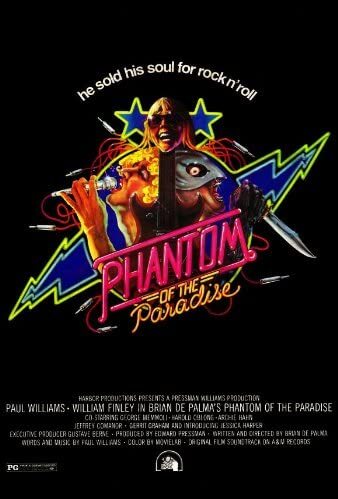 ''Swan . . .
he has no other name.
His past is a mystery, but his work is a legend.
He wrote and produced his first gold record at 14.
Since then, he’s won so many
that he once tried to deposit them at Fort Knox.
He brought the Blues to Britain.
He brought Liverpool to America.
He brought Folk and Rock together.
His band, the Juicy Fruits, singlehandedly gave birth
to the nostalgia wave in the 70s.
Now he’s looking for the new sound of the spheres
Advertisement:
to inaugurate his own Xanadu, his own Disneyland:
the Paradise, the ultimate Rock Palace.
This film is the story of that search . . .
of that sound . . .
of the man who made it . . .
the girl who sang it . . .
and the monster who stole it.''
— Opening Narrationnote by Rod Serling

Winslow Leach (William Finley, a De Palma regular) is an aspiring singer/songwriter who's quite thrilled when powerful music producer, Swan (Paul Williams, who wrote all the film's songs), expresses interest in using his music — a rock version of Faust — to open The Paradise, the ultimate rock theater. However, Winslow quickly finds out that Swan wants absolutely nothing to do with him after taking his music. Winslow gets lucky the first time he sneaks into Swan's mansion, when he meets cute wannabe singer Phoenix (Jessica Harper, in her first feature film), but he's not so fortunate the second time, where he's beaten up by Swan's men, framed for drug dealing, and sent to prison for life.

Life in prison isn't so kind to Winslow. His teeth are extracted for experimental purposes, and he winds up with a set of sharp metal replacements. One day, when he hears one of his Faust songs on the radio— watered down into cutesy pop and performed by Swan's most popular band, The Juicy Fruits— he goes insane and manages to escape prison, he even manages to terrorize Swan's offices and the thugs who beat him up, but ends up in a freak accident with a record press, severely deforming his face and damaging his vocal chords. Angry and desperate, Winslow heads to The Paradise and dons a cape and a mask, now becoming the titular Phantom. He attempts to kill The Juicy Fruits (now retooled into "The Beach Bums") with a bomb, but fails. When he confronts Swan alone shortly thereafter, he's put off-balance by Swan's now conciliatory manner.

Swan not only gives Winslow a shiny new voice box, but the opportunity to have his music produced properly. Winslow agrees, but only if Phoenix can be the only one to sing his songs. Swan agrees and insists that Winslow sign a contract with his own blood. However, Swan doesn't care to keep his promises and instead hires glam-rocker Beef (Gerrit Graham, another De Palma regular) to perform with "The Undead" (previously The Beach Bums). Outraged, Winslow decides to take matters into his own hands...and discovers Swan's plans for Phoenix — and his very nature — are even worse than he thought.

A combination of The Phantom of the Opera, The Picture of Dorian Gray, Faust, The Hunchback of Notre Dame, and The Cabinet of Dr. Caligari, Phantom of the Paradise is a rather polarizing film, having been a complete flop when it was first released (though at least receiving an Oscar nomination for its soundtrack). It's now considered a cult favorite.

Compare and contrast The Rocky Horror Picture Show, another 1970s rock musical that tackles horror themes (albeit in a much spoofier manner and sticking to more conventional themes like mad scientists, aliens, and haunted houses) and was considered a failure when it first came out, but is now a cult classic. (Also, both films were by 20th Century Fox and Harper played Janet in Shock Treatment, leading some fans to see all three films as a loose trilogy.)

Phantom of the Paradise

Phantom of the Paradise