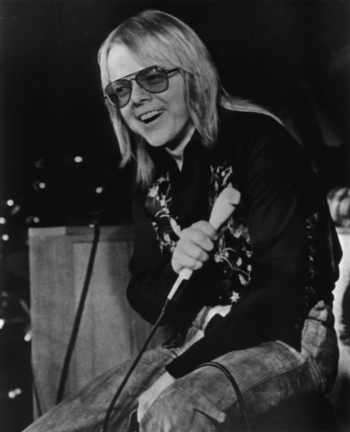 Why are there so many songs about rainbows? Because this guy wrote most of them.
"Just an old fashioned love song
playing on the radio
And wrapped around the music
is the sound of someone promising they'll never go.
You'll swear you've heard it before
as it slowly rambles on and on
No need in bringing 'em back
'Cause they've never really gone."
— "An Old Fashioned Love Song"
"Sentimental fellow
sometimes overmellow
Writing verses no one plans to do
I know I'm no Cole Porter
I'm noticeably shorter
Do I deserve to have someone like you?"
— "You Know Me"
Advertisement:

Paul Hamilton Williams, Jr. (born September 19, 1940) is an American singer-songwriter, musician, and actor born in Omaha, Nebraska. He was a prominent (albeit diminutive) figure in the pop culture zeitgeist of The '70s, having composed hits for acts such as Carpentersnote ("We've Only Just Begun", "Rainy Days and Mondays", "I Won't Last a Day Without You"), Helen Reddynote ("You and Me Against the World"), The Monkeesnote ("Someday Man") and Three Dog Nightnote ("An Old Fashioned Love Song", "The Family of Man", "Out in the Country"), and appearing in popular television shows of the era, such as Hawaii Five-O, The Love Boatnote (whose theme, an infamous Lounge Lizard stand-by, he composed), and The Muppet Show. He's even done some voice acting, playing the Penguin on Batman: The Animated Series and Cairo on Phantom 2040. He won an Academy Award for the song "Evergreen", performed by Barbra Streisand in A Star Is Born, also a #1 hit for Streisand.

Williams also composed soundtracks for cult Rock Opera Phantom of the Paradise (in which he also performed the role of villainous record producer Swan), children's gangster movie Bugsy Malone, and notorious box office flop Ishtar. Continuing his good relationship with The Muppets, he contributed several songs to the soundtrack of The Muppet Movie (most notably perennial classic "Rainbow Connection"), even making a cameo appearance as a piano player. His most recognizable film role might be Little Enos Burdette in the Smokey and the Bandit series or Virgil the orangutan in Battle for the Planet of the Apes, but he's reaching new audiences as a gun dealer known as "The Butcher" in Edgar Wright's Baby Driver.

As a performer in his own right, Williams recorded a number of albums, among them a well-regarded '70s album series on A&M, and overlooked gem Someday Man on Reprise. After over a decade of heavy substance abuse, Williams released his last album for more than fifteen years in 1981; his career as a songwriter would never quite recover, certainly not his career as a performer. The man himself, however, did, and has been an advocate of recovery ever since. He remains hugely respected by his peers, having been inducted into the Songwriters' Hall of Fame in 2001. In 2009, he was elected President and Chairman of the American Society of Composers, Authors and Publishers (ASCAP).

), the gospel musician, the saxophonist, the Temptation, the music journalist

and author of Das Energi, seven-plus footballers, or a The Young and the Restless character of the same name.