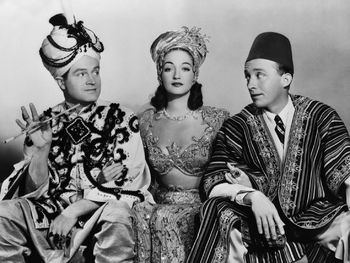 The Road to ... movies are a series of comedic adventure films starring Bob Hope, Bing Crosby, and (usually) Dorothy Lamour. Each of the films is a parody of a particular genre set in a different "exotic" locale, brimming with gags and musical numbers.

The series inspired a number of later comedy films, including Spies Like Us, Ishtar, and The Road to El Dorado, as well as the Family Guy "Road to..." episodes focusing mostly on Brian and Stewie.

Other films in this series provide examples, straight or parodied, of:

Alternative Title(s): Road To Singapore, Road To Utopia, Road To Rio, Road To Bali, The Road To Hong Kong