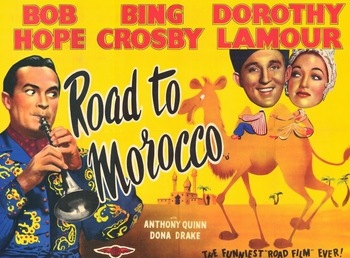 Road to Morocco is a 1942 film directed by David Butler, starring Bing Crosby, Bob Hope, and Dorothy Lamour. It is the third film in the popular Road to ... series.

In this one Crosby and Hope play Jeff and Orville, two ne'er-do-well cousins who are adrift at sea after a ship wreck—Orville took a smoke break in the powder room. They wash up on the coast of North Africa and hitch a ride on a friendly camel, ending up in a city somewhere in Morocco. They run afoul of bad guy Sheik Kasim, who is about to enter into an Arranged Marriage with the gorgeous Princess Shalamar (Lamour). Romantic complications and comedy hijinks ensue.