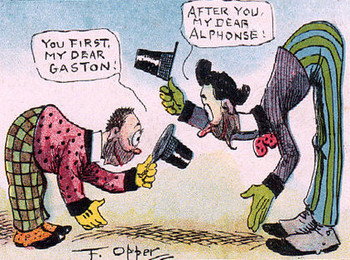 Known in the entertainment industry as the Alphonse and Gaston Routine (named after the "Alphonse and Gaston" comic strip by Frederick Burr Opper), this is a comedy trope from the days of vaudeville. It's when two characters are overly polite to each other, often in a bumbling way and almost always done comically. Often these two will be of a lower class but wish to dress and act in an upper-class manner and therefore take things to extremes. Often one will offer the other his arm if they are walking somewhere together, especially someplace fancy. Almost Always Male, occasionally with Homoerotic Subtext.

Often this routine involves a door or gate the pair will need to walk through, each of them insisting the other goes first (and eventually they both do simultaneously, and collide). The resulting deadlock is sometimes called a Canadian Standoff. This can also often lead to long lines of increasingly impatient and irritable people forming behind both characters who start urging them to get on with it. Occasionally the intent will be that neither really wants to proceed first, or at all, wanting his partner to endure whatever horrors might lie beyond the door first.

Since the comic strip originated in 1901 and was quickly also picked up in vaudeville routines, this trope is Older Than Television. In modern times, however, this has become a bit of a Forgotten Trope, though it still occasionally crops up.

Compare Politeness Judo, where this is being done as part of a passive-aggressive fight. May involve Outhumbling Each Other. Bantering Baddie Buddies often combine this with being Faux Affably Evil. See also Japanese Politeness. Inverted Trope of Vitriolic Best Buds.